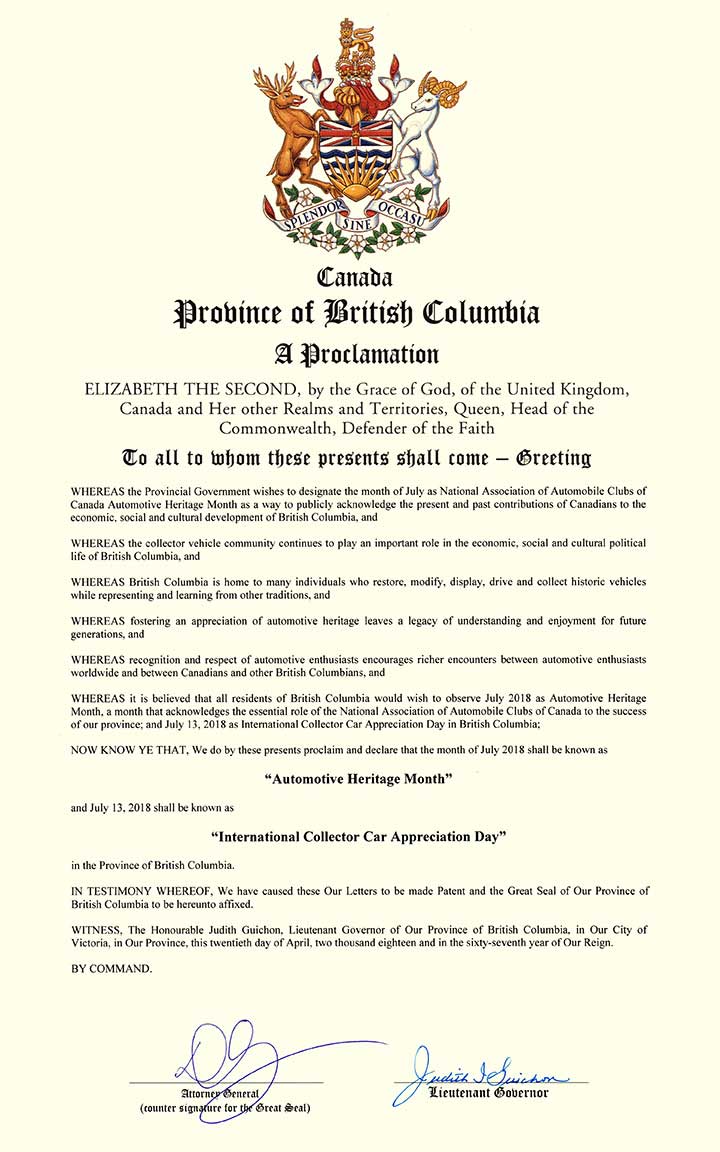 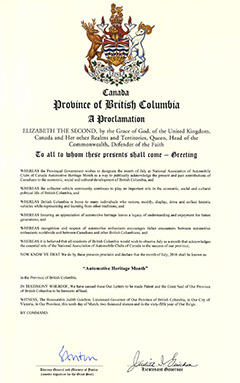 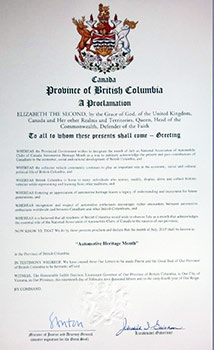 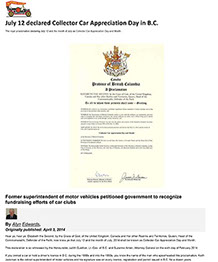 By Alyn Edwards
Originally published: April 3, 2014
Hear ye, hear ye: Elizabeth the Second, by the Grace of God, of the United Kingdom, Canada and Her other Realms and Territories, Queen, Head of the Commonwealth, Defender of the Faith, now know ye that July 12 and the month of July, 2014 shall be known as Collector Car Appreciation Day and Month.
This declaration is so witnessed by the Honourable Judith Guichon, Lt.-Gov. of B.C. and Suzanne Anton, Attorney General on the sixth day of February 2014.
If you owned a car or held a driver’s licence in B.C. during the 1980s and into the 1990s, you know the name of the man who spearheaded this proclamation. Keith Jackman is the retired superintendent of motor vehicles and his signature was on every licence, registration and permit issued in B.C. for a dozen years.
The royal proclamation declaring July 12 and the month of July as Collector Car Appreciation Day and Month.
Alyn Edwards, Jackman, along with the Specialty Vehicle Association of B.C., petitioned the B.C. government to issue the proclamation this year. “It is important to recognize all the work car clubs in B.C. do to raise money for charity,” Jackman says at his Langley home, where he keeps his restored 1970 Dodge Challenger SE muscle car.
He says the more than 200 car shows held annually in B.C. support charities by raising about $500,000. As well, money collected from car-show entry fees are often used to support school programs, particularly those that involve young people learning automotive trades. Finally, many collector car owners take time to share their vintage vehicles with the elderly by displaying them at seniors’ residences.

In the previous three years, a similar proclamation was made at the request of the National Association of Automobile Clubs of Canada (NAACC), representing most of B.C.’s car clubs and thousands of enthusiasts.
This year’s proclamation request was stickhandled through the government’s executive council by Rich Coleman, member of the leg islative assembly for Fort Langl  y-Aldergrove. “I just contacted him to ask for his opinion and was surprised when it passed,” Jackman says.

B.C. is not the first jurisdiction to recognize the many contributions made by those in the collector car hobby. At the request of the NAACC, Prince Edward Island was the first to declare July as Automotive Heritage Month in 2010, followed by others including B.C.The NAACC has also applied to the federal government to have the second Friday of July and the month of July declared as Automotive Heritage Month in Canada. As a result, all collector car owners are urged to organize or participate in events during July.

Nigel Matthews, president of the Specialty Vehicle Association of B.C., acknowledges the efforts of the NAACC while giving credit to Jackman for getting the B.C. government onside for this year’s proclamation.
“There is no one who has done more for the hobby than Keith Jackman,” he says. “Despite being retired from the Motor Vehicle Branch, he continues to offer his knowledge and support to guide associations and organizations for the continued improvement of the old car hobby.”

Keith was raised on a dairy farm in Matsqui and started his civil service career as a clerk at the Abbotsford Motor Licence off ice. He became a travelling driver’s licence examiner, going to small communities in the Interior before going back to Abbotsford to manage the office.One of his more colourful jobs in the 1970s was to convert licence plate manufacturing at the old Oakalla Prison in Burnaby from prisoner labour to a private workforce. “Some of the licence plates the inmates had issued contained inappropriate sayings,” he says with a grin.

When the Insurance Corporation of British Columbia was formed, he went to Victoria as director of vehicle registration to computerize the system and help integrate ICBC and the Motor Vehicle Branch.
Another view of Jackman’s restored 1970 Dodge Challenger SE muscle car.
Alyn Edwards, In the late 1980s, as superintendent of motor vehicles, he helped bring in the Collector licence plate and insurance program. ICBC had been reluctant to introduce the program when came under the control of the B.C. solicitor general. Then solicitor general Russ Fraser, a classic car enthusiast and owner, quickly
implemented the collector vehicle program, which is one of the most unique in North America.

The Specialty Vehicle Association of BC, of which Jackman was a member, was also instrumental in getting collector licence plate and insurance status for modified cars registered as 1958 models or older.
“I always liked cars,” Jackman says. He sold most of his collector cars when he downsized to a small property last year. Those included a restored 1928 Chevrolet coach, a 1950 Cadillac limousine, 1966 Dodge Charger and a 1967 Chrysler Newport convertible.

His current ride is a rare 1970 Dodge Challenger SE (Special Edition) with a beefed up 340 engine. “It’s modified so I can’t get collector licence plates and insurance,” he says.