Why do you suppose this courageous group of vintage car enthusiasts would liberate 3 old cars from a west coast museum and drive them thousands of miles in often-treacherous, dead of winter to bring them home to Detroit where they were all built? 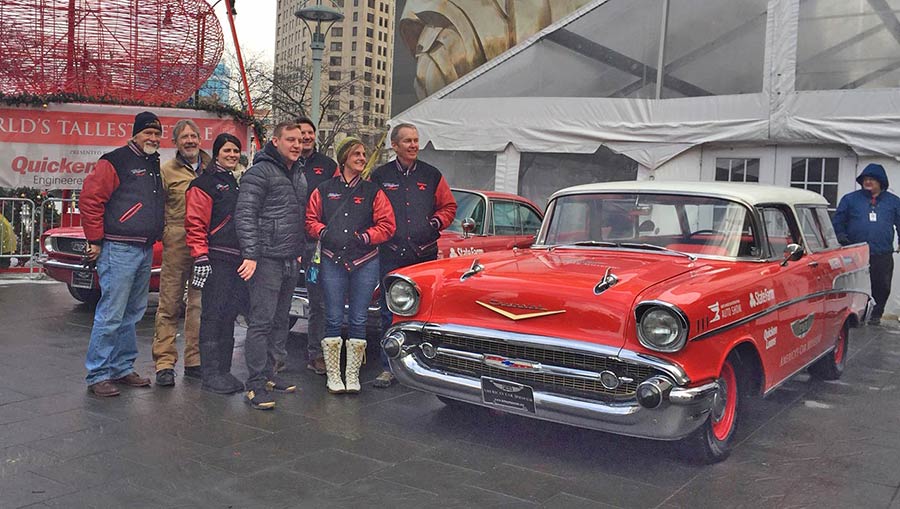 The simple answer is: because someone really needs to do it, and because they can. Leader of the team, museum CEO David Madeira, and his co-conspirators believe that these wonderful old cars need to be driven, not just left on static display in a museum.

I think he is right. That’s why I joined 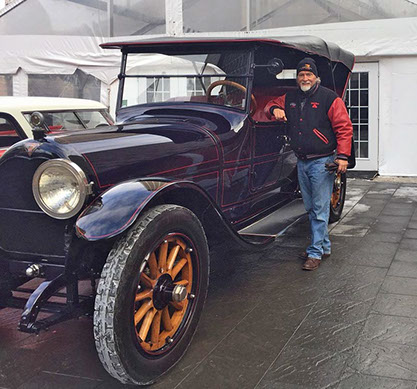 them for at least part of the drive.

The cars are all what is commonly known as “Detroit iron” from the hay-day of U.S. auto dominance, the 1950s and 1960s. They are: a 1957 Chevy Nomad, the stylish 2-door station wagon that has become an icon of design; a 1961 Chrysler 300G, the high performance version of that big, brash, massively-finned luxury car: and a 1966 Mustang, the first generation of the car that created a whole new segment in the market beginning the “pony car” trend. They all normally reside at the LeMay – America’s Car Museum in Tacoma, Washington and have been thoroughly prepared for the journey, including being shod with the best Michelin snow treads. The project is to show them off across the country on their way to be put on display at January’s North American International Auto Show in Detroit – an inspired project cooked up by Mr. Madeira, and auto show boss Rod Alberts. 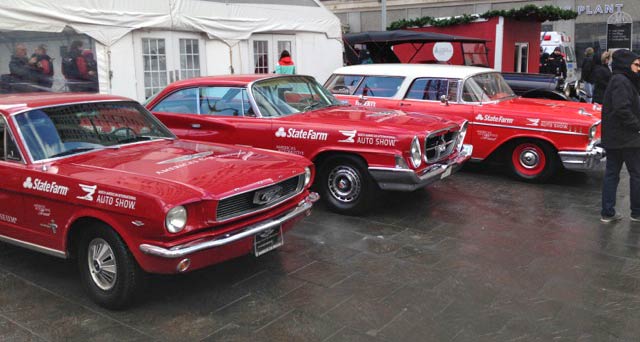 Last year the cars went from the museum in Tacoma to Detroit in 11 days with an amazing lack of mechanical problems and only a few weather issues right at the start. That trip resulted in great stories and connections with car lovers all along the way. This reporter joined that drive in Boise, Idaho for three of those days arriving in Denver on New Years Eve. The best part of that journey, I thought, was driving that gracefully wallowing old Chrysler over Loveland Pass at 11,000 feet sliding down the other side without accessing the ditch even once.

This year marks the second running of The Drive Home taking 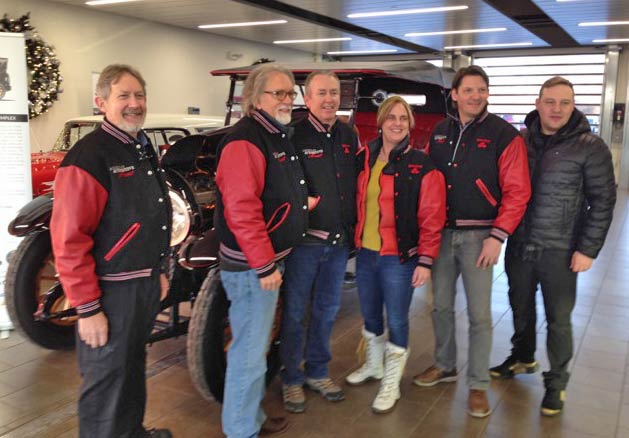 the same cars on an entirely different route – down the east coast from Boston to New York City then Washington DC back to Pennsylvania, west to Indianapolis, and up to Northern Michigan before finishing in Detroit.

One other old car joined the trip this year – J.D. Rockefeller’s massive, custom-built 1917 Crane Simplex touring car with body by Brewster that is celebrating its 100th birthday. It spent its road time mostly in a big enclosed trailer towed by the support truck. The Crane only came out for display and a little ceremonial driving, including our final run down Woodward Avenue. More on that later.

This year I joined the drive for the last few days here in Michigan, from Grand Rapids north to Traverse City, then back south to Lansing and finally Detroit.

While the weather was decent until they got to Michigan our courageous crew of LeMay museum employees, volunteers and a journalist or two, were not so fortunate with the cars mechanically. The Mustang began puking transmission fluid in Times Square, the Nomad suffered a disconnected valve lifter in Pittsburgh and an unexpected oil level scare on the New Jersey Turnpike, then the poor old Chrysler had brake issues off and on and finally a broken axle in Indiana putting it out of commission for the rest of the trip. Bummer! 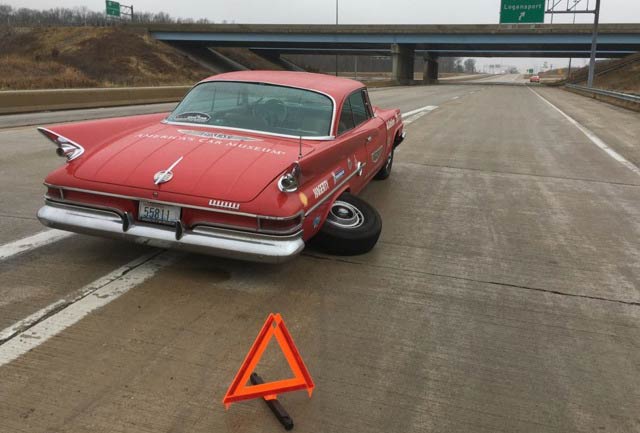 One of the event sponsors, Hagerty Insurance of Traverse City, did a masterful job, I’m told, of helping manage some of these problems, particularly the ones requiring a tow. All agree, though, the on-site hero was Dale, the guy in charge of the support truck and trailer, who repeatedly fixed the cars along the way. He had his hands full every day to be sure. They had to flat-bed the Chrysler back to Detroit while parts were ordered and arrangements made to get it repaired by the time the others were scheduled to arrive a few days later.

They had no real weather issues until I joined up with them in Grand Rapids, MI for the last few days of the drive. A serious cold front blasted across Lake Michigan just as they arrived bringing low double-digit temps with 30 mph winds and just enough horizontal snow to glaze the roads thoroughly. Wind chill indexes hovered at or below 0-degrees. At an early morning cars-and-coffee reception a TV news interview out on the street had us struggling the old Crane Simplex out of the trailer for the cameras. It felt like frostbite was threatening by the time we got everything packed up and the cars headed north for Traverse City.

What would be a two-hour drive in normal conditions took nearly four as the lake-effect snow continued to blow in from the west keeping the roads slicker than snot on a doorknob. But the old cars’ heaters kept us adequately warm as we skated along for those couple hundred miles without incident, though a big new Ford pickup slid off into the median a rolled onto its side passing our support truck. Dale stopped to call 911 for him. I was at the wheel of the Mustang for that leg of the journey and it handled surprisingly well on the crusty ice and snow covering the road surface.

It felt like a hero’s welcome at Traverse City where the Hagerty Insurance company, largest employer in that touristy northern Michigan town, hosted both an afternoon reception and a luxurious dinner for the group. Dinner was in the building where they keep a large, eclectic collection of classic and collector cars used in part for training employees at all levels. Even phone bank staff members go out there to work on the old stuff. 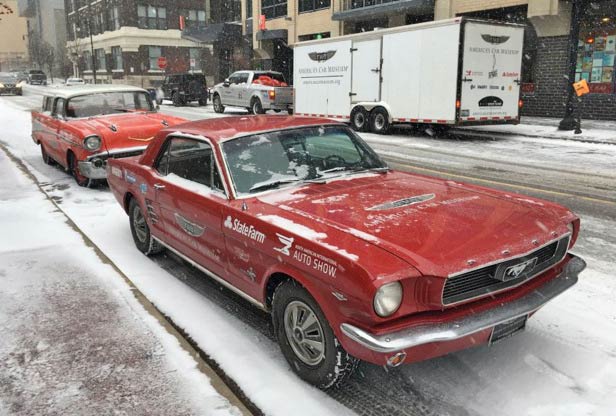 for an early afternoon reception in the Lansing area then on to the finish in Detroit by evening. We kept the cars out of the ditches, unlike a few other unfortunate cars along the way. About half way through our final day’s drive the roads cleared up and it was smooth sailing to the finish – though still mighty cold.

After a richly deserved night of rest the final jaunt, or we could call it a modest parade, along famous Woodward Avenue took the cars – including the 1917 Crane Simplex – about 15 miles from the northern suburb of Troy downtown to the rapidly redeveloping center of the city where a media event was prepared. We kept the cars together with the help of the Michigan State Police who helped us through many red lights. Museum director Madeira with two hearty passengers led the procession with the Crane. All were well bundled up, of course. The temperature was around 10-degrees and that old girl has no side curtains. Mr. Madeira and both his passengers reported surviving that drive on pure adrenalin. All were still grinning when they arrived at the finish.

I rode shotgun downtown in the hastily repaired old Chrysler. She purred like a massive lap cat riding smoothly on her new axle. Before we left Troy all the cars got washed (unlike last year when we intentionally kept them in the patina of the road) and glowed in the intermittent, but still mighty cold, sun. Folks along the route were obviously surprised to see this odd procession.

These hearty old cars will remain on display in Cobo Center throughout the full run of the North American International Auto Show. As the others get shipped back to Tacoma after the show the Mustang will stick around Detroit all summer where it will participate in shows, cruises and other events continuing The Drive Home project.

And, it now appears the decision has been made that we’ll see The Drive Home III next year. They’re seriously thinking about starting this one in south Florida.

Three of ACM’s cars, a 1957 Chevrolet Nomad, a 1961 Chrysler 300G and a 1966 Ford Mustang, will trek from ACM to the place of their automaker’s origin, Detroit, Michigan, this winter. Iconic American auto technology will take on snow and ice for an 13-day transcontinental odyssey, December 27 – January 8.

The Drive Home will consist of a 2,900 mile journey with stops along the way for enthusiast “rallies” in  various cities along the way and concludes with the opening of the North American International Auto Show. 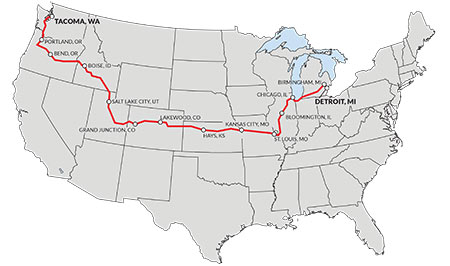 Enthusiast gathering in Bend, OR

The LeMay – America’s Car Museum is a museum in the city of Tacoma, Washington. The new museum facility adjacent to the Tacoma Dome opened on June 2, 2012.

The NAACC was on hand for the opening and also attends the Kirkland Concours D Elegance that takes place at the facility. 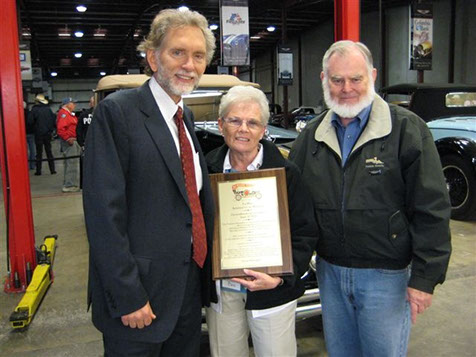 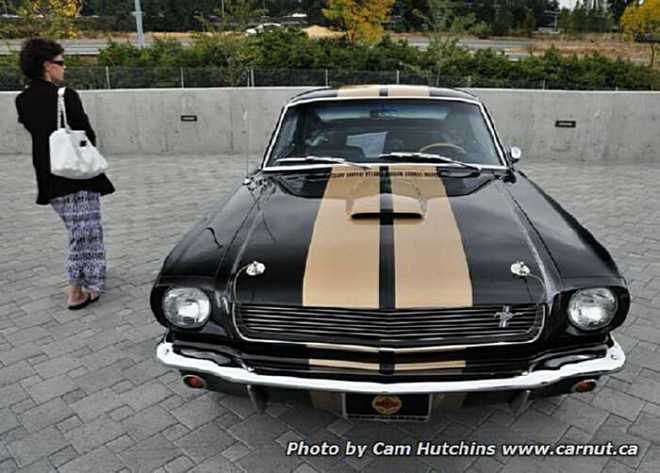 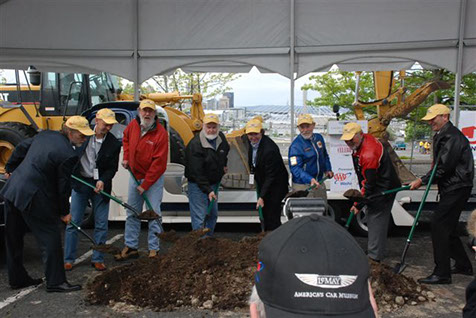