So far for 2022 we also have the following provinces confirmed: - British Columbia - Saskatchewan - New Brunswick - Alberta with more to follow Thanks to all the great work of the hobbyist for your time and dedication in preserving and enjoying your great rides.. Thank you from the NAACC

As a the member of provincial Parliament for Niagara West, I am proud to support and acknowledge the moth of July as Automotive heritage Month Sam Oosterhoff, MPP Niagara West

Mr Chisholm, Thank you for your recent letter reguesting that July be declared as Automotive Heritage Month in New Brunswick, and that July 8, 2022, be declared Collector Car Appreciation Day.

Now Therefore be it known that I, Andrew Smith, Minister of Sport, Culture and Heritage, do hereby proclaim that the month of July 2022 shall be known as Automotive heritage month

I, Laura Ross, Minitster of parks, Culture and Sport in the Province of Saskatchewan in exercise of the powers conferred upon me, do hereby designate the month of Juky 2022 to be: "Automotive Heritage Month in Saskatchewan

WHEREAS automotive enthusiasts are celebrating the month of July as "Automotive Heritage Month" across Canada; Now therefore be it known that I, Nate Glubish, minister of Service Alberta, do hereby Declare July 9, 2022, Collector Car Appreciation Day in the Province of Alberta. Congratulations to Wilfred Moase and PEI for getting their NAACC Proclamation declaring both Automotive Heritage Month and Collector Car Appreciation Day for 2021.

SEMA/SAN also has a nice recognition on their website as well. The SEMA Action Network (SAN) announced that the next Collector Car Appreciation Day (CCAD) will be celebrated on July 9, 2021.  The date will mark the twelfth consecutive commemoration in what is now an annual event to raise awareness of the vital role automotive restoration and collection plays in American society. The National Association of Automobile Clubs of Canada has announced that in concert with SEMA Action Network (SAN) Canada will celebrate Collector Car Appreciation Day on July 9, 2021 and for the twelfth consecutive year and has declared that the month of July will be NAACC Automotive Heritage Month. Proclamations are being issued by the Canadian Provinces in the next three months. The NAACC urges all collector car enthusiasts across Canada to join SEMA/SAN. Please call up www.semasan.com today and join for free.

As seen in the Official SEMA Publication

Thanks to the efforts of the National Association of Automobile Clubs of Canada , Nova Scotia Premier Stephen McNeil has again issued a proclamation designating July 2019 as “Automotive Heritage Month” in the province.  Since 2010, the U.S. Senate has passed resolutions at the SEMA Action Network’s (SAN) request to acknowledge “Collector Car Appreciation Day” which serves to raise awareness of the vital role automotive restoration and collection plays in American society.  This year’s celebration is scheduled for Friday, July 12th.
more>>

The Honourable Sherry Gambin-Walsh, Minister of Service NL, was joined by provincial members of the National Association of Automobile Clubs of Canada (NAACC) to proclaim July as Automotive Heritage Month in Newfoundland and Labrador.

Thousands of enthusiasts throughout Canada and the United States gather each year for car cruises, parades and other events to celebrate automotive heritage. By taking part in these events, automotive enthusiasts and related businesses share their passion and enthusiasm for classic cars, while promoting the preservation of the automobile.

The NAACC also uses its vehicles to give back to communities and charities throughout the country. Over the course of its history in the province, members have raised more than a quarter of a million dollars for charities in Newfoundland and Labrador, including Easter Seals, Shriners, the Children’s Rehabilitation Centre, the Janeway Children’s Hospital and the VOCM Cares Foundation.

The NAACC is a federally incorporated, non-profit organization of Canadian automobile clubs. For more information about events planned for the month of July please contact naaacccmembership@yahoo.ca. 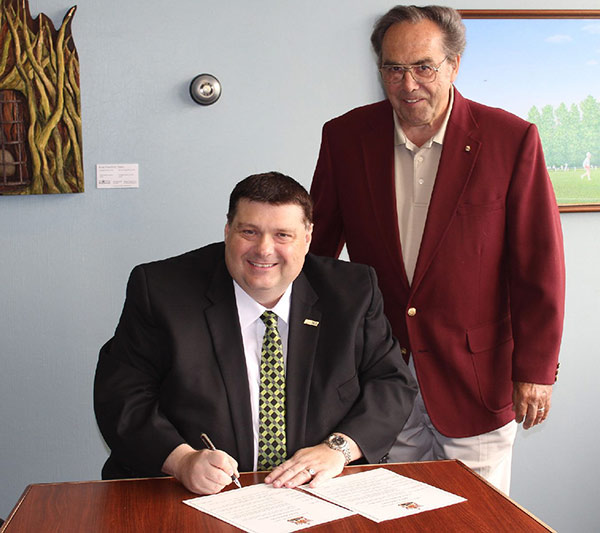 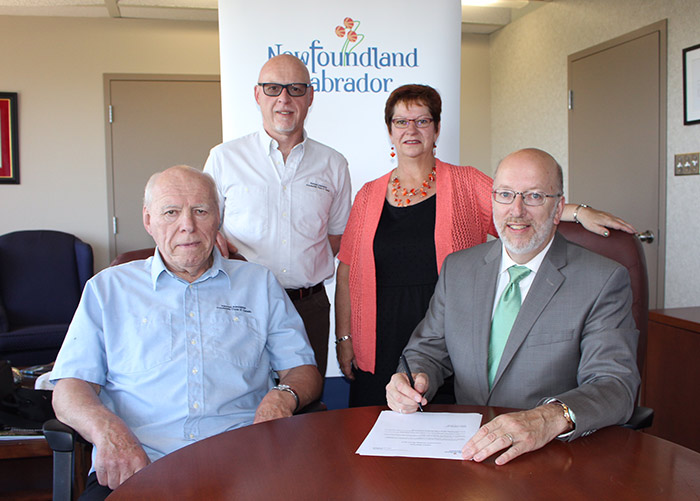 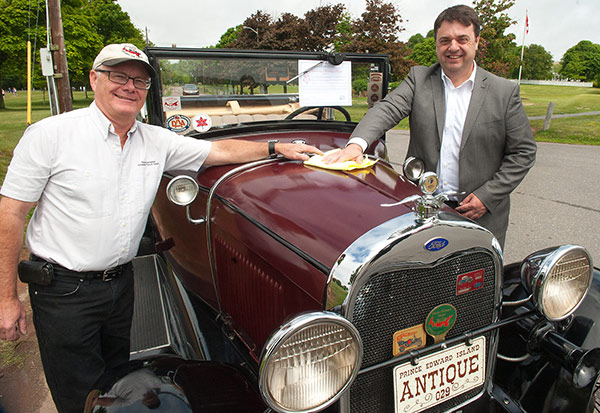 Wilfred Moase and Hal Perry on the right , Minister of Education, Early Learning and Culture (which includes Heritage) 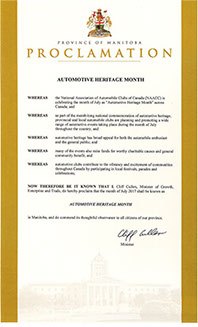 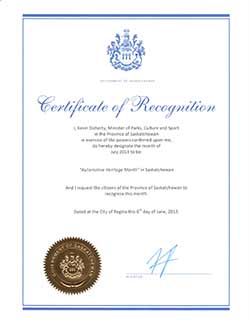