Jim has been involved in the automotive hobby for over 50 years. His interest started when his father gave him an old motorcycle that he had acquired with some farm equipment. Growing up in rural Alberta, Jim quickly turned this street bike into trail bike to be used instead of saddle horses. This was followed by ever faster bikes until an accident on a Triumph Bonneville damaged his  hand so he could no longer ride. The wrecked bike was traded for a chopped Model A roadster that needed a motor 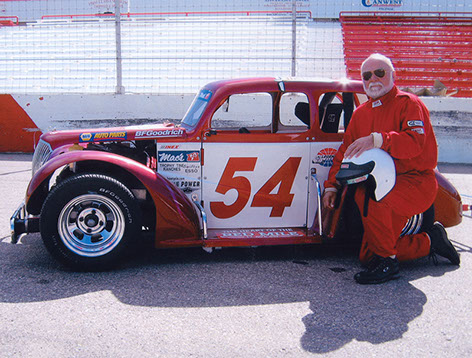 Drag racing had reached rural Alberta, a flathead Mercury V-8  was installed to take the little “A” down the track. JIm was working on the oil rigs to support is car hobby and as winters are cold in Alberta, the Merc flathead was installed in 1941 Ford Coupe that could be raced on the weekends and still get him to work.

Marriage and return to school spelled the end of the coupe. A more economical car was required. Jim was introduced to LBC’s (little British cars). After driving Austin Healy BN7 on his honeymoon, he was hooked. Numerous MG’s, Austin Mini Cooper and Triumph Vitesse followed until an expanded family required larger vehicles.

Raising a family and building up a Petroleum Engineering Consulting firm put the car hobby on hold. Project field work opened a renewed interest in off road vehicles. Jim built up several high lift pickup trucks and a V-8 powered Toyota Land Cruiser to use on and around the project sites.

Finally by 1997, less travel and a reduced work load allowed Jim to return to his LBC passion. In the past 15 years he has done several frame off restorations of MG’s and Triumphs. But the one that took the most work is 1951 MGTD that was taken from being an ornament in a bar to an International Show winner. Not only has the little MG won numerous Best of Show awards it was participated in many road rallies including an 1800 mile 15 day rally tour of Southern Ontario and New York State.

Jim is past President of Calgary MG Car Club and has been involved in organizing numerous All British Field Meets in Alberta and BC.

Jim has been a Director of the Specialty Vehicle Association of Alberta since 2009 and currently  is the treasurer of the association. He also chairs the safety check committee and sits on the government action committee.

Past work on governmental and environmental legislation while in the Petroleum Industry has taught Jim that the only way to prevent overly restrictive legislation is to be at the table to be able to present your side of the issue. That is what NAACC does. It represents the automotive hobby at the table with an informed voice backed by it’s many member clubs across Canada