The 46th Annual Coastal Swapmeet was a great success and the promoter informed us that they are ahead of last ear at this time for inside and outside stalls.

What started out as a small gathering of car enthusiasts cleaning out old car parts, has grown into one of the biggest automotive themed swap meets in Western Canada. 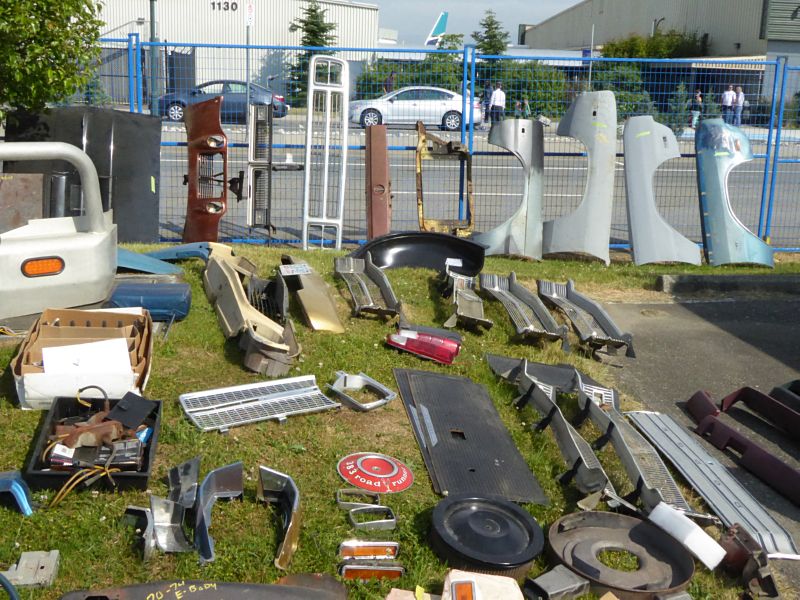 The swapmeet has for many years been put on by the Vancouver Chapter of the Vintage Car Club of Canada, The Totem A and T Club and the Pacific International Street Rod Association and more recently the British Columbia Hot Rod Association. The show is well attended and the clubs do an great job running the whole show smoothly and efficiently.

But the Swapmeet itself is more a gathering of the greats and not so greats of the car hobby. Many people that do not go to car shows and are pretty low key make it to the swap meet and it is an amazing gathering of the minds….and a great place to see old frends.

Besides all the great parts available, Al Clark from Deuces Northwest was on hand promoting the next Deuce day in Victoria in 2016 and had the latest T-shirts available. Trent Reeve was on hand with his huge selection of tim signs and other artwork for Carnuts of all ages.

Mark Dulmadge of Calgary is a graphic artist who’s passion for hot rods and classics has led him to create a line of clothing and signs using uniquely designed and copyrighted brands such as Vintage Evil, Torque Brothers and Older and Wiser. He had also created the very popular line of Speed Demon products.

I was also set up with my showboards and old images for sale.

Lots of cars were for sale and the crowd was big…so it should be on every carnut’s list of events to go to in 2016!!!.