Honoring 60 years of the feature Marque Chevrolet Corvette, 45 Corvettes competed in a number of classes while on display at “StingRay Island” was arguably the most significant Corvettes in existence. The entire Paddock and pit area were filled with significant cars from racing’s past with such notables as the Marmon Wasp that won the first Indy 500.

Staged over 3 days in August the weekend of races attracted 550 racing cars and 16 classes with 8 classes racing on the Saturday morning and afternoon while the other 8 classes competed on Sunday. Thursday and Friday were slated for practice and qualifying sessions. The 11 Turn 2.2 mile track has huge elevation changes and is close to Monterey and Carmel California and sometimes has fog shrouding the track in the morning.

For the first time in many years the Thursday Pebble Beach Concours Tour D Elegance drive of cars came to the track for a lap. It was a unique way to see these prized vehicles.

The Paddocks had 2 displays of Corvettes with the main area having a collection of great production and racing Corvettes. The second was dubbed “Stingray Island” for the weekends events and featured the famous 1956 Corvette Sebring Racer, the famous 1956 Race car SR2 , the 1959 Stingray Racer, the Mako Shark and the Manta Ray. Some other racing and significant cars were also there to please the many corvette fans. 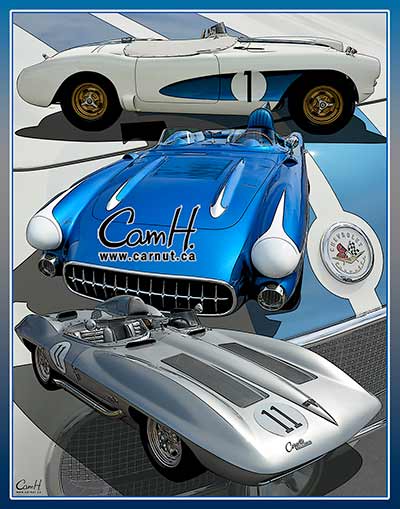 There were 4 Canadians that raced in the Monterey Historic Races at Mazda Speedway Laguna Seca. It seems the Islands of BC have produced an immense wealth of talent as 3 of them were located there. Former Duncan Car Dealer Pieter Baljet got third place in his 1990 Chevy Beretta while Victoria’s Lindsay Ross’s 1966 Shelby GT 350 ran with Willowdale Ontario’s Lorne Leibel in a 1964 Shelby Cobra in Group 5A on Saturday. 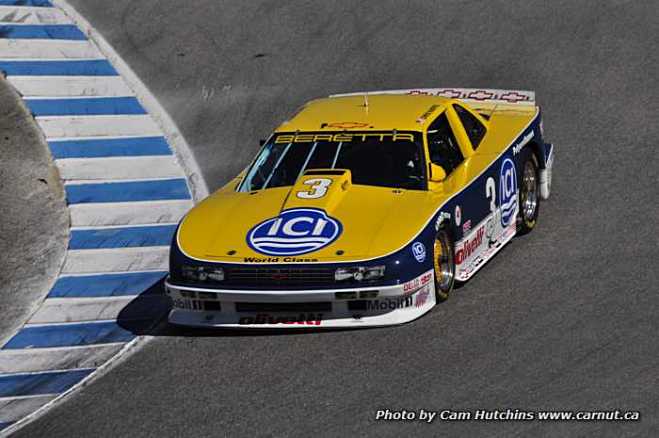 A recent addition to our part of the world, George Holt of Gabriola Island ran a 1963 Devin C in Group 1B but also ran a Jag XK last year. The racetrack has some great vantage points for photography and from talking with some fellow photographers form Europe is one of the easiest tracks to shoot at. 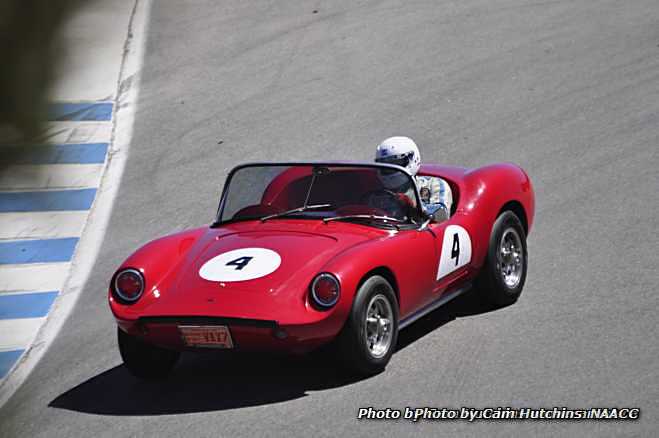 As the Sun moves across the sky different places to shoot open up throughout the day with turn 5 being a very good place to watch cars get loose in the morning as they have to hit the corner very fast to carry any speed up the long hill to the infamous Corkscrew. Up the hill a little ways shooting turn 6 from the campgrounds is a great eagle’s eye vantage point looking down on the cars as they power through the sweeping curve at a very high speed.

After noon the sun is just about perfect for the corkscrew and although the cars are going slower through the tricky curve the action is hot as they accelerate hard going down the hill.

This year we camped at the track and as an old man sleeping on the ground is not my favorite thing but camping at the track is awesome. You just walk a short ways to the best spot to shoot and avoid the problems with traffic and parking. I cannot imagine what the line ups and parking are like at the Indianapolis 500.

Keeping in the Big Thundering engine racing the Group 4A 1960 – 1968 Sports Racing USRRC Cars class consisted of a number of 6 litre or better V8 cars and also a number of 1600cc cars. This was the class filled with Lola, McLaren and Lotus with a smattering from all the major players from back in the day. Huffaker Mk V Genie, Chevron, Elva, Brabham along with a number of specials and my personal favorite the 1967 Shelby Can-Am Cobra. Times ranged from the slowest of around 2 minutes to the 1:34.611 of winner Ilya Burkoff’s 1969 McLaren M6B. One of the Group 4a competitors John Harden raced a 1963 Genie MKVII and he had actually raced the Pebble Beach Road back in 1953 before Laguna Seca was built. After 60 years of racing he retired from racing after Saturday’s race, placing 6th out of 33 cars that finished..

Group 5a was the GT cars over 2.5 litres from 1963 to 1966 and one of the most astounding Corvettes to ever be built, the Gran Sport showed up to play. I have not seen a Gransport at the Monterey Historics for quite some time and it was awesome to watch it race. Bruce Canepa drove it to Victory with a fastest lap time of 1:41.008just a hair away from the second place 1965 Shelby Cobra of James Farley (1:40.770) and the third place 1965 Corvette of Tommy Steuer (1:40.770) of Bogata, Columbia. Including the Gran Sport, 19 Corvettes,13 Cobras and GT 350’s raced against such notable race cars as the Low Drag 1963 XKE Jaguar Coupe, 1968 Bizzarrini Strada GT and the L79 powered 1964 ISO Rivolta of Pete Whitehead.

The cars of Group 7A were all special in some way and the race was won by David Swig Driving a 1958 Scarab MK I and it was astounding. Of all the special bodied Sports Racing cars this is probably to best looking next to a pontoon body TestaRosa…but since none of them came to play the Scarab was the bell of the Ball. With an engine around a third of the size of many of the other cars in Group 7a it ‘s fastest lap was 1:44.743. Other notables in this race were the Maserati special and the 1961 Jaguar Ol Yellar raced by Edith Arrowsmith.

Finishing off Saturday was the 1966 -1972 Historic Trans AM cars of Group 8A. Trans AM racing was from the height of the “win on Sunday sell on Monday” mentality and all the major manufacturers gave it a shot to some degree or another. The Boss 302 and the Z28’s seemed to dominate the series and just to shale things up a bit the race was won by a 1970 AMC Javelin with a best time of 1:42.901. All the cars ran engines around 5 litres and the announcer remarked that the number of cars on the grid was larger than any Trans Am race back in the day!

Sundays group 1b was car Sports Racing cars under 2000cc from 1955 – 1961 and had a field of cars from Lotus, Elva, Porsche, Lola and a few specialty race cars such as BC’s Gabriola Island’s George Holt and his Devin C Type. Tiny little motors putting out enough horsepower to get laps time from 1:49.252 up to 2:10 with one rare car running as slow as 2:23…a very close race.

Racing next was the 1947 to 1955 Sports Racing and GT Cars with a field of 41 cars that saw only 33 cars finish. The quickest time was from 1:49 and then blossomed from there. Cars such as the Mercedes 300 SL Gullwing coupe raced alongside Allards, Jag Specials, a Porsche 1500 Super Cont. Coupe, Morgan Plus 4 TT, BMW 700S, Mg TC, the winning 1963 Talum GMC and of course the best name ever for a sports racer…the 1958 Lister Knobbly!

The second to last race featured 40 car field of GT cars under 2400cc from 1961 – 1966 and included all the fan favorites such as Lotus Super Seven, Mini Coopers, Lotus Cortina’s, Lotus Elans, Alfa Romeos, BMW 2002, a 1964 Huffaker B Roadster driven by Scott Brown, while the winning car was a 1972 Jensen Healey driven by Joe Huffaker. All the cars featured engines under 2 litre and the times were in the 1:43 to the 2 minute range.

The Weissach Cup was a Porsche lover’s dream was the group 8B race featuring 42 Porschs from 1964 to 1975 and came from 8 different states and as far away as Belgium and Germany. Exactly half of the 42 car filed was from California so there were lots of fans cheering on the locals drivers.